While the U.S. Trump administration’s sanctions against Iran that went into effect in November 2018 impacted the country in many different ways, for the domestic pet food market, they turned into a true disaster.

Pet food sales in Iran were booming in the first half of 2018, with imports reaching all-time highs, and all forecasts were projecting further fast growth, according to Savis Ansani, director of the local consulting agency Persian Pet International. Yet, it didn’t take long for import limitations to plunge the market into chaos.

First, when the sanctions were announced, they caused a downward rally in the exchange rate of the Iranian rial. The domestic pet food market was rather sensitive to the rate, since almost all pet food was imported, primarily from the European Union.

Then, in a bid to constrain prices, the government banned import of a range of luxury goods, surprisingly including pet food, Ansani said. “This caused soaring prices for pet products as the stocks of these goods began to deplete inside the country. Pet owners were completely baffled and desperate, not knowing what would happen next. In the midst of this, some people tried to smuggle pet goods with low quality as well as some fake products into the country. Some people tried to produce these [pet food] products in Iran but with sub-standard methods and poor quality.”

In 2019, the Iranian government re-authorized pet food import into the country, although the unprecedented decline of the national currency resulted in the average retail price of pet products climbing three or four times higher compared to pre-crisis times, according to Ansani. The new prices didn’t kill demand completely, but it is not comparable with what was seen a year ago. 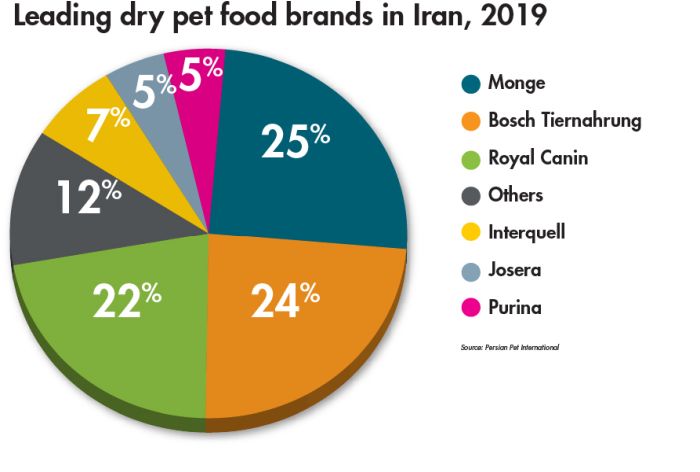 “Some goods are forbidden to be imported to Iran, and even for the goods that are not forbidden, most of the European companies are afraid of doing business with Iran. And if they do so, they may find themselves on a U.S. blacklist, though according to their governments, there are no restrictions to working with Iran,” Mirfakhrai said.

Even for goods allowed to be imported by the local government, the authorities are placing many barriers to make the import process as difficult as possible, Mirfakhrai added. This practice is intended to make the domestic currency stronger, by reducing demand for dollars and euros, but it also results in significant costs for importers to overcome the barriers.

In addition, there are not only legal costs, but also what used to be described as black costs – in other words, unofficial payments – the importers must make to import some products into the country. 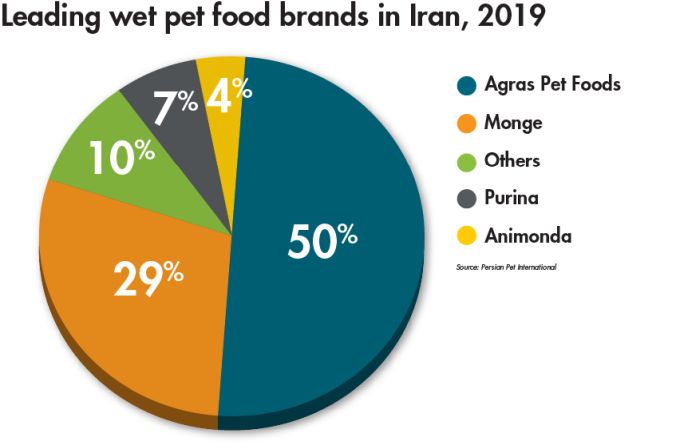 The import restrictions, however, have created a strong impetus for development of the domestic pet food industry in Iran. Dr. Navid Nasirian, director of local manufacturer Nutripet, said his company managed to nearly triple production over the past year and expects further growth. Nasirian added that a few small-scale pet food manufacturers emerged in the country and began to replace imports.

“This year we plan to produce 3,000 [metric] tons of pet food. We have 23 different product lines, and every three months we introduce one or two new products,” Nasirian said, adding

that the overall demand for pet food in Iran is estimated at 7,000 metric tons per year.